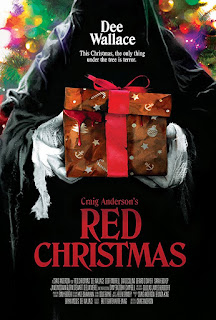 
Red Christmas is about a family who gets together to celebrate the holiday when a demented stranger shows up determined to tear the family apart.
I must say that I tend to love Christmas themed slasher films. There’s something about all the decorations and all the lights and all the joy that somehow mixes together to create the perfect atmosphere for terror and bloodshed. That being said, Red Christmas offers very little, if anything, to get excited about. And having someone as awesome as Dee Wallace as the lead, that’s saying a lot.
The first moments of the film put me on edge right away with a polarizing opening sequence as sound clips play back and forth highlighting the bumper sticker arguments for and against everyone's favorite topic: abortion. Granted, the topic does play a role in the film so having it here isn’t completely out of the question. It’s just such a distracting topic and perhaps a little steep to be offered as a plot device in a slasher film. In my opinion, of course.
While sitting around about to open presents, the mother and head of the family, Diane (Dee Wallace), wants everyone to say what they're thankful for. It wouldn't be Christmas without some good ol fashioned family dysfunction, so naturally they begin arguing. At this moment the doorbell rings. Standing at the door is a man who looks like a cross between Ghost Face and the Mummy and it is beyond comprehension that Diane invites the stranger into her home because, after all, "it's Christmas." At this point I was struggling to stay interested in the film. I can suspend my disbelief for the sake of a film, but this scene is one of the biggest problems in a very weak script. Diane inviting this shrouded, creepy stranger into her home is an action based solely on a forced necessity to move the story forward. From here we have more family dysfunction as the non-believer side of the family pokes fun at the religious side of the family by trying to get them to drink and smoke pot. I Suppose these scenes are meant to be played for humor… but I’d merely be guessing.
There's simply no fun to be had with Red Christmas. The introduction to the killer is absurd, the characters have zero personality being nothing more than stereotypes and the constant religion bashing just turned me off. Several scenes came across as having an agenda to push and I simply don't see that as a good time. To top it off, despite it's somewhat hokey, on the nose tone in the beginning, the film is devoid of humor of any kind.
Overall, Red Christmas is uninteresting in every way and takes itself way too seriously. Just skip this one.
Posted by JasonMc at 4:39 PM No comments: