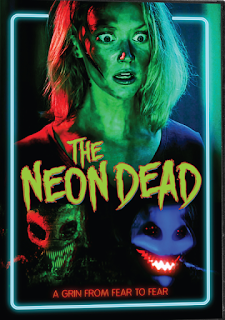 The Neon Dead is about an unemployed recent college graduate named Allison (Marie Barker) who discovers that her new home is occupied by a group of undead voodoo zombies. To get rid of the problem Allison calls on two paranormal exterminators, Desmond and Jake, who are eager to take the job. But this particular paranormal case may be more than they bargained for.
The Neon Dead has a rather obvious ode to the days of video stores and a bygone era of the home video explosion and the creative and imaginative horror films that came with it. The films main character, Desmond (Greg Garrison), works in a video store located in a supermarket (remember those days?), the title The Neon Dead is a nod to the 1981 indie horror staple The Evil Dead, and one scene displays a Tales From the Crypt comic. So the film does not try to hide it's influences, it instead wheres them very proudly on its sleeve. This nostalgia in horror, particularly indie horror, seems pretty common these days with varying degrees of success. I'm happy to say that The Neon Dead plays the nostalgia card pretty well and captures the fun and campy feel writer/director Torey Haas was most likely going for.
I'll start by pointing out the strength in the casting. Marie Barker as Allison is severely likeable in this film. She's an independent woman with a professional demeanor (recent college graduate living on her own) who also has a wide eyed child-like innocence about her that captures her character perfectly as a young woman ready to start her career. Greg Garrison also does a great job as the cocky but charming Desmond who has an apparent and immediate attraction to Allison. This attraction pushes Desmond, along with his partner Jake (Dylan Schettina), to get the job done no matter what. The likeable and somewhat clumsy acting of the three leads is endearing and we root for these characters.
The wonderful neon creature design is another thing The Neon Dead has going for it. This isn't Avatar-like technology here folks, but on a reported $17,000 budget the undead look like demented glowing Snapchat filters that look like a twisted masquerade party inside of a dead fun house rave. Just the sight of them is high energy and tons of fun and it's best to watch this in the total dark (duh) so the neon colors will be the most effective.
At the center of the film is a creative little back story that explains how the undead came to be in the house and tells how they are more than just zombies, this is mentioned several times throughout the film: they're zombies but...there's more to it than that! It's a fun little history that plays out like an episode of Tales From the Crypt.
The one aspect of the film that doesn't add anything to it was the music. I wish it had a more loud and energetic feel to it at times, combined with the loud look of the undead it could have enhanced several scenes. Instead the music feels flat at times and even seems to drag down the pacing at certain points.
The film and its characters have a nonchalant feel that is an oblivious and funny portrayal of the wacky and potentially deadly adventure that is playing out on the screen. The attitude throughout The Neon Dead is, “ok, we're going to fight some undead voodoo zombies and save the world today.” It plays off the youthfulness of the characters and combined with fun and campy lines like, “no one turns my friend into a zombie and gets away with it,” The Neon Dead is an all around great time.
The climax of the film has what looks like good old fashion claymation on display in a swirling video game-like world of racing red and green lights that caps off the film nicely and brings full circle the ode to a bygone era of horror that was mentioned earlier. Turn off the lights and grab some popcorn and just have fun watching this one!
And watch through the end credits.
Posted by JasonMc at 12:35 PM 2 comments: 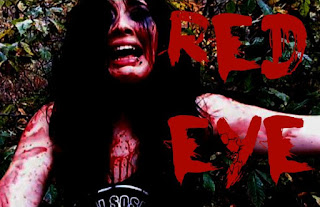 First, explain what Red Eye is about?

"Red Eye" is a legend Gage use to be told as a kid. When Gage found out there was truth behind the legend he decided to take a group of friends out into the backwoods of Black Creek WV. He used this legend as the basis of his first film project as he is an aspiring filmmaker.

Were there any influences on the filming style for Red Eye? If so, what were they?

Destinie: One of my biggest influences was "The Devils Rejects" because the handheld, in your face, gritty look for the intense scenes was something we utilized in the second act of "Red Eye." "Evil Dead" (2013) was another influence because the lighting of the woods and camera work through the woods was visually stunning.

Tristan: I agree with Destinie on how influential the look of "The Devils Rejects" played a part in our film. I also think "Night of the Living Dead" was one that had some influence on the film with the use of shadows.

Were there any inspired moments on set that allowed for improvisation or the slight changing of a scene, or did you pretty much adhere to the script?

Tristan: We followed the script fairly well but there were a few things that got alternated or cut because various conflicts or reasons. All in the fun of independent filmmaking!

Destinie, as an actress how is it different preparing a character for a feature length film as compared to a short film?

Destinie: With a feature film, you definitely get to spend a great amount of time with your character opposed to a short that is usually done in a day or two.

You had a couple of popular names in the indie horror world on set with Jessica Cameron and Heather Dorff. What was it like working with them and what was the biggest takeaway you had from their experience?

Destinie: They are both very (very) sweet girls and definitely know how to have a good time. It was great working with them as they are very seasoned actresses that have years of experience. I learned a lot about the industry and craft with my time spent with them.

Tristan: Oh boy...where do I even start? These girls are a blessing. It was an absolute honor working with them. They taught me so much in such a short time. We were lucky to have them apart of our first film. And jeash, do they know how to have a good time!?

Was there a specific film or actor or filmmaker for each of you that made you want to make movies?

Destinie: Some directors would be Rob Zombie, Jen & Sylvia Soska, and Wes Craven. I'd say the twins because they started out the way we did with "Dead Hooker in a Trunk" with a budget of nothing then built themselves up. I'd also say Rob Zombie because I fucking love him and I aspire to make films as original and bad ass as his. And Wes Craven because "Nightmare on Elm Street" was the first horror film I saw as a kid and my favorite of all time, he is the reason I am the person I am today.

Tristan: I'm going to copy Des above but I do have to say Rob Zombie has inspired me to make original films that stand out as their own. Another inspiration of mine that I have to give credit to for helping me tremendously in making my first feature and inspiring me on the daily is my dear friend, Jessica Cameron. She is one of the most hard working people with such a beautiful soul and talented mind.

Having completed the filming on your first feature film, what's the most important thing other first time filmmakers should expect?
Destinie: I'd say other first time filmmakers should expect that its not a walk in the park. It takes hard work, dedication, and immense passion to make a feature film. But if you love it enough and never quit, its possible. Go out and kill it.

Tristan: I will definitely say making a film is not easy. We've faced so many challenges but they've only made us stronger and ready for the next one. Don't let that scare you though...because nothing worth it comes easy. Hit record and tell a story!

Tell us where we can find and connect with you guys, Red Eye, and Deranged Minds Entertainment. Also. do you have any other projects in the works or anything else you'd like to share?

Destinie: I have "Party Night" coming out next year and a few other films in the works. As for Tristan and I we are all "Red Eye" until we get it through post-production. Although, we do have another film idea for a future project.

I want to thank Tristan and Destinie for taking the time to talk with me! I encourage readers to check out all the social media sites and connect with Red Eye and friend Tristan and Destinie on Facebook and follow them everywhere else. It'll be fun to watch their careers grow and this way you can say you've been there since the beginning.

Posted by JasonMc at 3:52 PM No comments: